Got mine yesterday; aside from the standard fare cloth material used, this is an exceptional Vader. The helmet sculpt alone is shockingly amazing.
W

are the lower ball jointed forearms of Dark Times Vader skinny? Just wondering since a few minutes ago i did some surgery on the old Black Series Revenge of the Sith Vader where i used hot water, a car model scalpel knife to get the lower forearms loose.

Getting their cards pre-bent.

Chewbacca said:
Getting their cards pre-bent.
Click to expand...

You are correct, these are the openers. I have a collector grade coming from BBTS tomorrow....

Got mine on Wednesday and man... I am blown away.

I never thought my all-time favourite VC93 ANH Vader could be topped, but he totally has been. This guy is a masterpiece. I feel like I'm holding a mini Sideshow Collectibles figure in my hands.

Here he is compared to his predecessor in my collection (I never picked up the Rogue One version as I've never been a fan of the overly red lenses - note how younger me blacked them out with a Sharpie lol - nor am I fan of hard plastic robes generally). I honestly have loved VC93 so much for all these years since he was released (what, 2013 was it?) He's been on my desk ever since then. In fact, he even came with me to university. But the day has come for his retirement...

There can be no sentiment among the Sith however... not when it comes to rival opponents. There can only be one apprentice!

The fraying and oversized cape aside (isn't too much of an issue, just position it right and it looks great still), this figure is incredible and will probably take another 9 years to replace again like VC93 did. The head sculpt is unmatched, the articulation is 'super' and then some (I don't think another Vader has as much range of movement in his neck as VC241 does). It just doesn't get better than this (and I'm actually a Black Series collector these days - my childhood attachment to 3.75" however has me dip in on TVC for a few favourites to 'play with' on my home desk though). Seriously, this puts the recent *supposed* 'Kenobi version' of Vader in the Black Series to complete shame.

A couple of things I would point out though to be aware of:

-As others have said, the cape is frayed at the top for some reason. Looks like this has happened to everyone's.
-The cape is quite is quite oversized (but that being said, it's the best fabric they've ever used in terms of it being way more opaque this time).
-The paint on the lightsaber hilt(s) is quite delicate and already starting to chip away with very little 'play' from, and the hand isn't even that strong a grip (although it's definitely a good grip, but I think the paint itself is the problem)
-The helmet is quite a soft plastic. I made the mistake of putting him in my pocket (I opened him downstairs and was going upstairs with him to his new home in my office but had full hands lol) and he came out with a slight dent (only visible if you look really close from bird's eye view). So just be careful with his helmet.
- @weequaynomad you asked about the elbow joints. They are thin but really impressively strong. They don't feel like they could break to me, even with force applied. Same goes for the wrists, even with the interchangeable hands they still feel really strong. No worries here from me of breaking anything.

That all being said, I love this guy. He's my new ride or die Vader!

Masterpiece huh. I can’t wait then to get mine. 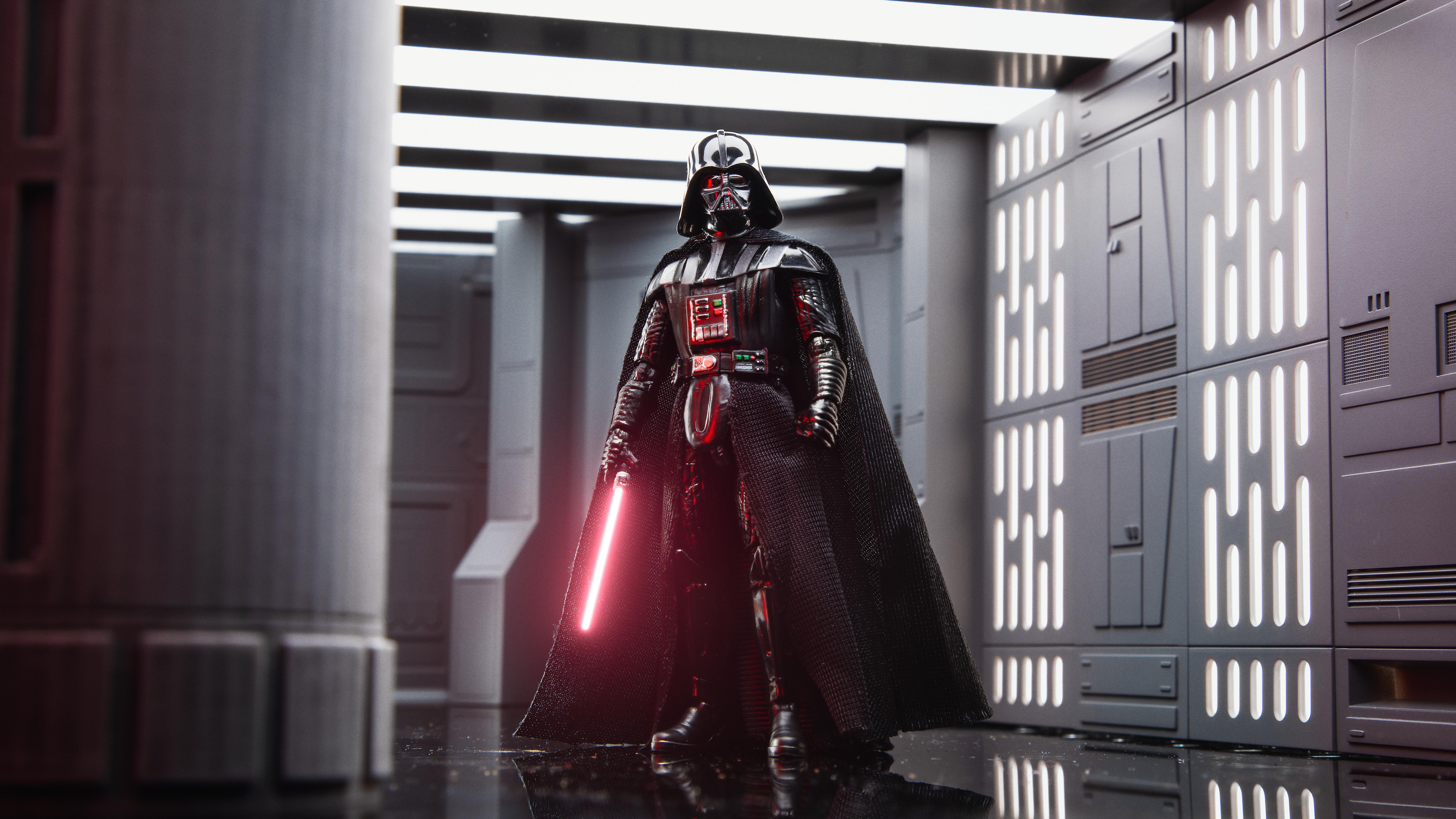 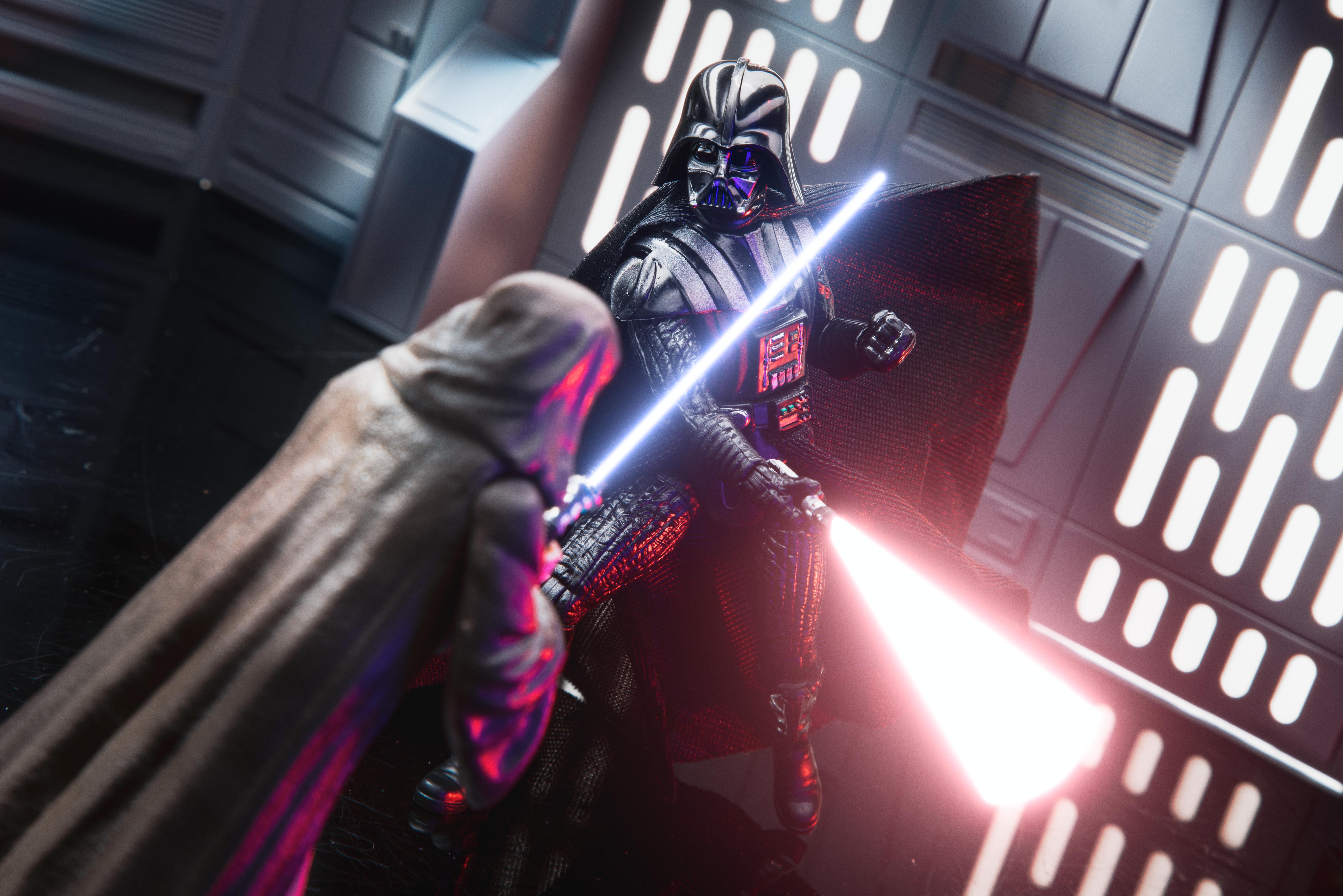 Here is my new one compared to my previous one. I find the cape a bit too big though. The new one is on the stand. I can't even remember which version my previous one was.

I might swap the capes, but the material on the new one seems better. I might have to just play around until I get it positioned the way I want. 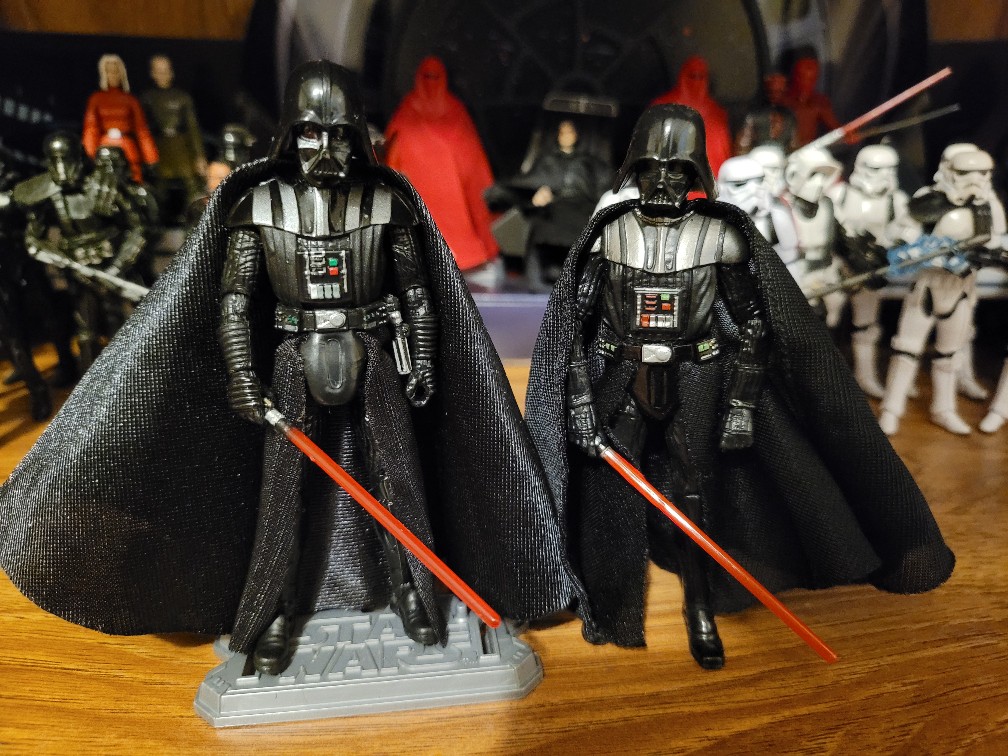 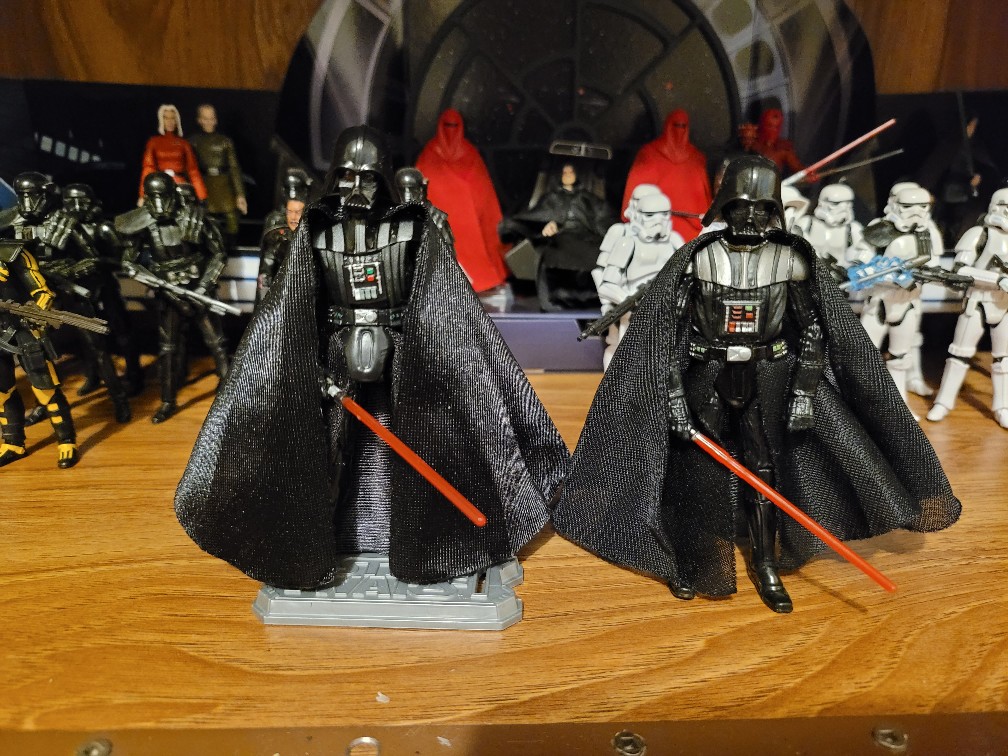 The cape is definitely huge, but with excessive futzing it can look pretty good.

I mostly just created some folds in the back of the cape, sort of like Homer Simpson tying all his fat behind him.

Water treating it could help, too.

Managed to make it slightly better by folding in the sides of the cape. Surprised it's holding. 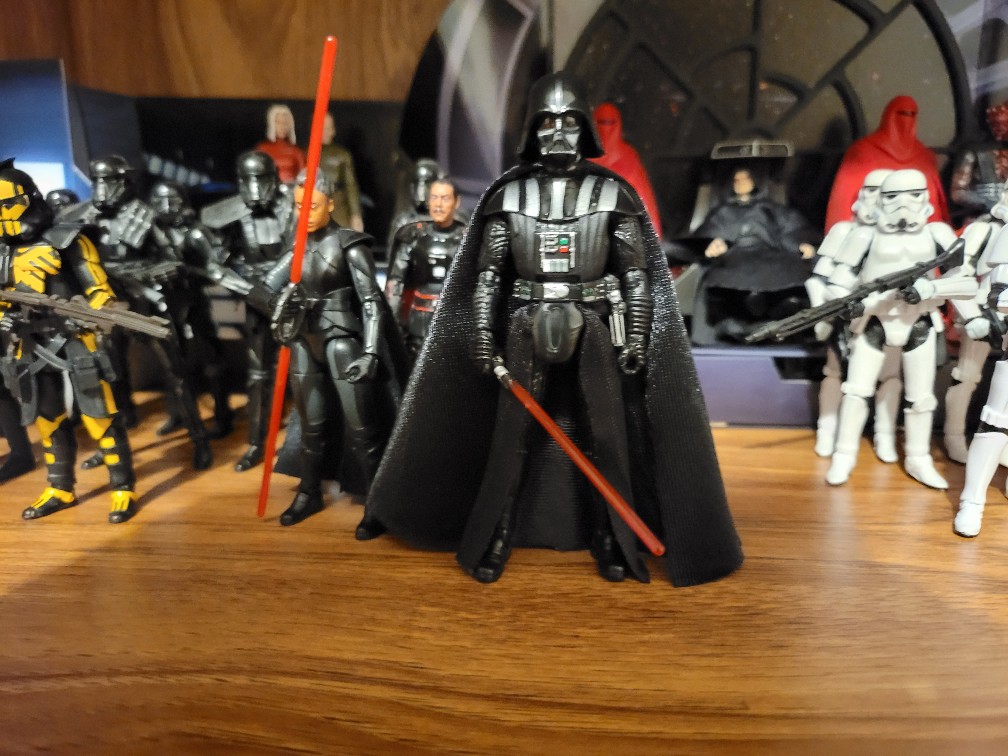 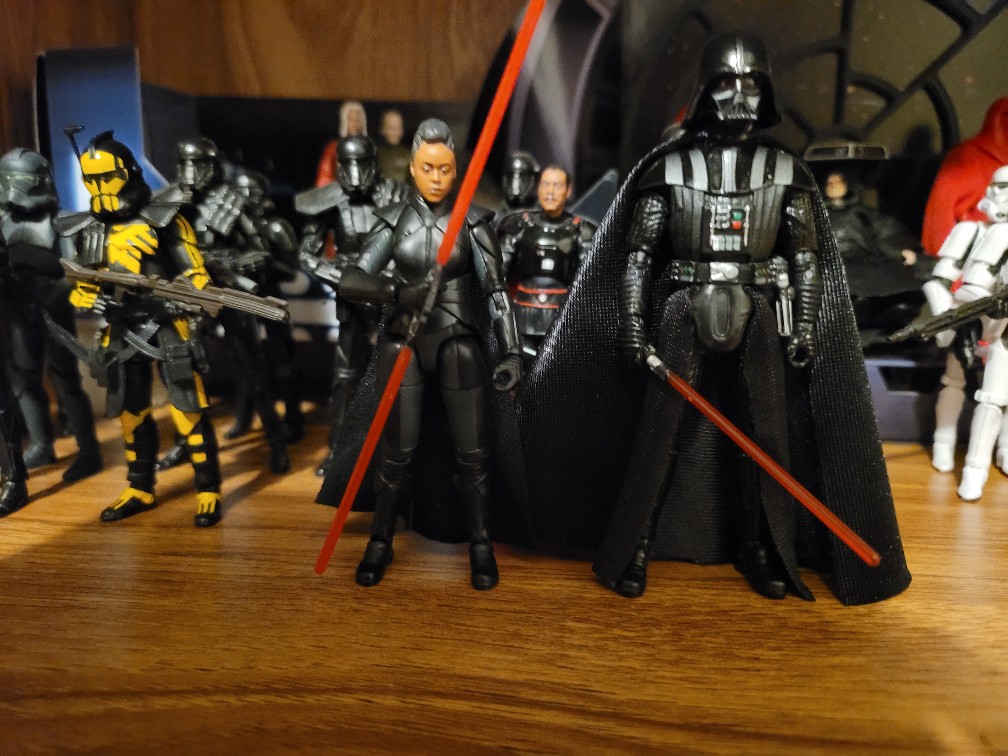 Didn't realize till after uploading the pictures were a little fuzzy. Sorry about that.
H

I am going to hoard these. love the figure and card back.
B

Not sure if it's feasible at this scale, but could ironing pleats into the capes help?

I would recommend some caution though: use a lower temperature, a spray bottle for moisture, and maybe a pressing cloth to avoid any possibility of scorching the fabric.
N

In the past, I just lay the cape flat but folded where I want the folds and just put something heavy on it and let it sit for a while. I didn't do that with the Vader yet. I think it is ok the way it is for now.

Such an incredible figure. The peak of 3.75” Star Wars, for sure.

Very pleased to add this one to my collection today, like everyone else has said it is indeed the bee's knees

Irezumi said:
Very pleased to add this one to my collection today, like everyone else has said it is indeed the bee's knees

Yes! It's nice to not have everything arrive pre-warped! lol I mean in reality it's not a big issue as I'm an opener but occasionally I'll keep a certain figure carded so it's nice to see they're not as easily to bend on their own simply sitting in a box.

Masterfett said:
Yes! It's nice to not have everything arrive pre-warped! lol I mean in reality it's not a big issue as I'm an opener but occasionally I'll keep a certain figure carded so it's nice to see they're not as easily to bend on their own simply sitting in a box.
Click to expand...

I'm thinking about getting another Fives if the new one is on the thicker card stock. That new Jedi Boba as well.

I haven't posted here in a long time, but noticed this thread about the new 'Obi-Wan Kenobi' Darth Vader. I was lucky enough to find an opener at a local Target a few weeks ago, and if anything, I just really enjoy seeing how advanced they can make these figures compared to what we got when we were kids in the 70s/80s. I like this Vader.

TK0471 said:
I haven't posted here in a long time, but noticed this thread about the new 'Obi-Wan Kenobi' Darth Vader. I was lucky enough to find an opener at a local Target a few weeks ago, and if anything, I just really enjoy seeing how advanced they can make these figures compared to what we got when we were kids in the 70s/80s. I like this Vader.View attachment 432478
Click to expand...

Beautiful shot, even though I'm a huge Boba fan, Vader was my favourite figure when I was a 7 year old and had the biggest surprise when it got given to me after I mentioned how much I loved Vader in the new Star Wars movie that I had just watched at the cinemas.

Got two of these for $9.97 each at Walmart today. Absolutely a fantastic figure!!!

It is a beautiful figure but my shots don't do it justice.

Location
On the bridge of the Errant Venture

Ugh, not a fan of Microsoft Teams. I miss Lync/Skype.

Come on, David Millman...get your head in the game!

ClanVizsla said:
Come on, David Millman...get your head in the game!
Click to expand...

But I do love the figures! I’ve never actually seen that Predator figure stand along side TVC (as far as I can remember). It looks pretty great.

Too funny, can't believe you guys zoomed straight passed my figures and went for my colleagues...

Had this guy PO'd from Amazon, but found him today on the pegs at Target. Holy crap, the hype IS real! This is hands down the best Vader figure...ever! Absolutely love it! Upon opening him, I instantly regretted not buying two.

I don't really collect very many figures anymore but I just got this in from BBTS today and WOW I am blown away. This is the best Darth Vader figure Hasbro has ever made in any scale. Really solid figure.

I can't believe how good this figure is

I always get excited when I see this thread bumped with new pics and discussion. Pure, simple delight.

I don’t know why, but no other TVC figure has held my interest like this - even long after owning it. I love seeing more and more people pick him up.

I might have to break him back out for pics soon when the weather is nicer.

Figure is made with soft plastic except for neck ball post, T bar, & pelvis section


Very well designed with forward thinking to making Vader’s different looks with minimal retooling to do so. The use of an outer sleeve (or cover) that incorporates the shoulder armor, upper inner robe, & control box makes Vader’s other looks easier to create by retooling this piece.

Thanks for posting those pics.

Really wish Amazon would start shipping these.
You must log in or register to reply here.