Looks like there's another Vader on the horizon with pre-orders starting May 4th.

Definitely will order (supporting the line). Maybe this will lead to some new figures!

Is this a guild exclusive, doesn't really say anywhere
T

The website has it under the Regular Release category instead of PGM.

I can't find this anywhere on their site. Only the Concept Vader and Bespin Leia. Link please?

EDIT: I've been scouring the internet for a link, even just one where these pictures came from. I cant find it. I did come across some additional info that these are limited to 750 but with a limit of 2 per customer. The card has foil accents. Its supposed to go on sale at 11am Eastern time.
Last edited: May 4, 2021
T 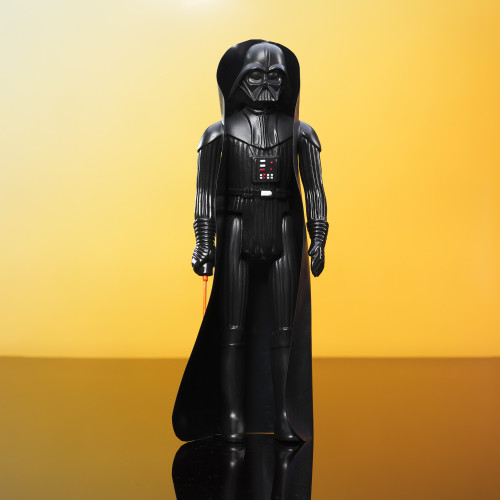 A Gentle Giant Ltd. release! The newest Jumbo Star Wars action figure goes back, way back, to the beginnings of Star Wars! Based on the concept art for Darth Vader, this new 12-inch figure features an all-new concept-inspired head sculpt, a new blue-and-black paint scheme, a vinyl cape and a...

Excited to get this Vader. Missed him the first time around and now he is on my preferred card from ESB. Also glad this line is not dead!
Last edited: May 4, 2021

Picked one up, if you are a guild member and use the 15 off coupon code it only comes to $66 all in, not bad at all

I got one! Also this is a pre-order so they won't charge you up front. Go get them guys and support the line!
Last edited: May 4, 2021
D

DarthChristopher said:
If only they made him taller this time, in scale like their IG-88 jumbo figure. I like they made him shiny, an improvement.
Click to expand...

I hope that it will be as shiny as the prototype they are showing... in the past (before DST acquired GG) their final figures were not as good as their prototypes :|
M

For some reason my payment won't process. There's no flag that notes this sold-out. Anyone else experiencing this issue?

edit...changed cards and it accepted payment. Odd. Regardless, happy to get my order in like the rest of you.
Last edited: May 4, 2021
T

MZimmerman said:
For some reason my payment won't process. There's no flag that notes this sold-out. Anyone else experiencing this issue?

edit...changed cards and it accepted payment. Odd. Regardless, happy to get my order in like the rest of you.
Click to expand...

Was it a saved card? I find that for some reason my saved card won't always process. If I just type in the info again it works.
M

TheChildNC said:
Was it a saved card? I find that for some reason my saved card won't always process. If I just type in the info again it works.
Click to expand...

You know, it wasn't. And there's no issue with the card, so not sure what the issue was. Nice to jump back into these 12" versions as I sold all I had about 10 years ago. Kind of regretting getting rid of the Greedo...

I put an order in for one of these, it will be my first Jumbo figure. Vader is the one I have wanted most aside from a Biker Scout, so pretty excited about having one.
J

Preordered him. Gonna post my ANH Vader up for sale.
J

I prefer ESB so no sweat for me!

While I'm glad they are re-releasing him for those that need him, and that they are making him glossy this time, I DO wish they were fixing the scale of him AND including the double-telescoping lightsaber (in red) that we had tooled up for the early bird set. I know a DT lightsaber isn't accurate to an ESB card release... but the foil 40th anniversary accents on the card are already no accurate to the ESB release. I'd just feel better buying him again if he were more "improved."
T

Just got a text that payments are getting processed on Friday.

TheChildNC said:
Just got a text that payments are getting processed on Friday.
Click to expand...

That was incredibly fast...
D

Mine hasn’t processed yet…anyone else?
D

Boo! Was supposed to be Friday…
D

If my card was declined how many days do I have to resolve it? I totally forgot to transfer money over to that card. The figure is sold out now so I hope they are reserving mine from the original order until I resolve the decline (Thursday).
You must log in or register to reply here.
Share:
Facebook Twitter Pinterest Email Link
Top